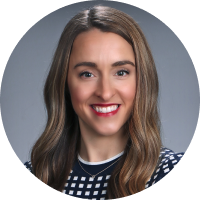 Dr. Robertson grew up in Lexington, KY, and completed her undergraduate education at Miami University in Ohio, where she earned a BA in zoology with a minor in neuroscience.

During this time, she became interested in vision and the relationship between the eye and the brain.

She attended optometry school in Chicago at the Illinois College of Optometry, graduating in 2013. She then completed a residency focusing on the management of complex ocular disease at the Baltimore VA Medical Center. As part of this program, she enjoyed attending lectures and working with ophthalmologists at the Wilmer Eye Hospital at Johns Hopkins University. These experiences continued to develop her passion for ocular and retinal pathology. She is also a fellow of the American Academy of Optometry.

Since completing her formal education, Dr. Robertson has moved multiple times due to her husband’s changing military assignments, most recently from the DC area. This has afforded her with diverse experience in the field of optometry. She was a Clinical Instructor at the Rosenberg School of Optometry in San Antonio. She was also an optometrist at the Spokane VAMC, where she also worked with students and residents as an adjunct faculty member of the Pacific College of Optometry. She has also worked at multiple optometry and ophthalmology private practices.

Dr. Robertson is thrilled to be back in the Pacific Northwest with her family. She is married with three young children: a daughter and twin boys. In her free time, she can be found chasing her children around, biking, or exploring Tacoma!