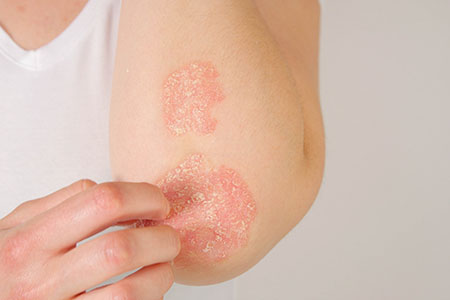 Psoriasis is a group of chronic skin disorders that causes itching, burning, scaling, or crusting of the skin. At Cascade Eye & Skin Centers, we treat all forms of psoriasis, as over seven million men and women in the United States are affected by some form of this condition. The most common forms of psoriasis include:

Although there are a variety of forms of psoriasis with varying levels of severity and symptoms, some general signs of psoriasis to be aware of include:

Psoriasis typically develops between the ages of 15-25, and the most commonly affected areas are the scalp, elbows, knees, hands, feet, and genitals.

Psoriasis cannot be cured, but it can be treated successfully for months or years at a time. Treatment depends on:

The main purpose of psoriasis treatment is to reduce inflammation, diminish scaly patches, and manage other painful symptoms. The most common treatments utilized for psoriasis are:

Often the first line of treatment for psoriasis, topical treatments like creams and ointments, are able to slow cell reproduction and soothe inflammation.

This type of treatment reduces inflammation by slowing skin cell reproduction through consistent and medically-supervised ultraviolet light exposure. There are two types of phototherapy:

Prescription medications are usually only prescribed for more severe symptoms after topical treatments and phototherapy have been unsuccessful. This type of treatment may entail oral pills or injectables.